CBSE Class 10 Syllabus - COVID-19 has impacted our lives along with studies, businesses, and economies, globally. We from 10yearsquestionpaper hope you and your family are doing well and staying safe during these challenging times. Here we are providing the syllabus which has been uploaded on the official site of CBSE cbseacademic.nic.in for the current academic session, 2020-2021. Due to the government’s order classes in school for the new academic session are not functional, we recommend the students to use their time effectively and start preparing for their board exams. CBSE syllabus for class 10th will allow students to plan their journey for achieving success along with scoring good grades. The link to download the subject-wise syllabus for all subject is provided below.

*Note: The annual board examination for CBSE class 10 will be of 80 marks, with a duration of three hours. There will be an internal assessment of 20 Marks.

The syllabus for class 10th CBSE Maths has been released on the official site of CBSE for the session 2020-2021. Students are advised to check the weightage of each unit and prepare accordingly.

1. Polynomials (7 Periods) Zeros of a polynomial. Relationship between zeros and coefficients of quadratic polynomials. Statement and simple problems on division algorithm for polynomials with real coefficients.

3. Constructions (8 Periods) 1. Division of a line segment in a given ratio (internally). 2. Tangents to a circle from a point outside it. 3. Construction of a triangle similar to a given triangle.

2. Trigonometric Identities (15 Periods) Proof and applications of the identity sin^2 A + cos^2 A = 1. Only simple identities to be given. Trigonometric ratios of complementary angles.

3. Heights and Distances: Angle of elevation, Angle of Depression. (8 Periods) Simple problems on heights and distances. Problems should not involve more than two right triangles. Angles of elevation/depression should be only 30, 45, 60.

1. Areas Related to Circles (12 Periods) Motivate the area of a circle; area of sectors and segments of a circle. Problems based on areas and perimeter/ circumference of the above-said plane figures. (In calculating the area of a segment of a circle, problems should be restricted to the central angle of 60, 90, and 120 only. Plane figures involving triangles, simple quadrilaterals, and circle should be taken.)

2. Surface Areas and Volumes (12 Periods) 1. Surface areas and volumes of combinations of any two of the following: cubes, cuboids, spheres, hemispheres, and right circular cylinders/cones. Frustum of a cone. 2. Problems involving converting one type of metallic solid into another and other mixed problems. (Problems with combination of not more than two different solids be taken).

2. Probability (10 Periods) The classical definition of probability. Simple problems on finding the probability of an event.

The syllabus for class 10th CBSE Science has been released on the official site of CBSE for the session 2020-2021. Students are advised to check the weightage of each section and prepare accordingly to score good.

Acids, bases and salts: Their definitions in terms of furnishing of H+ and OH- ions, General properties, examples and uses, concept of pH scale (Definition relating to logarithm not required), importance of pH in everyday life; preparation and uses of Sodium Hydroxide, Bleaching powder, Baking soda, Washing soda and Plaster of Paris.

Metals and nonmetals: Properties of metals and non-metals; Reactivity series; Formation and properties of ionic compounds; Basic metallurgical processes; Corrosion and its prevention.

Life processes: ‘Living Being’. Basic concept of nutrition, respiration, transport and excretion in plants and animals.

Functioning of a lens in the human eye, defects of vision and their corrections, applications of spherical mirrors and lenses.

Practicals should be conducted alongside the concepts taught in theory classes.

2. Performing and observing the following reactions and classifying them into: (Unit - I)

3. Observing the action of Zn, Fe, Cu and Al metals on the following salt solutions: (Unit - I)

4. Studying the dependence of potential difference (V) across a resistor on the current (I) passing through it and determining its resistance. Also plotting a graph between V and I. (Unit - IV)

5. Determination of the equivalent resistance of two resistors when connected in series and parallel. (Unit - IV)

6. Preparing a temporary mount of a leaf peel to show stomata. (Unit - IV)

7. Experimentally show that carbon dioxide is given out during respiration. (Unit - II)

8. Study of the following properties of acetic acid (ethanoic acid): (Unit - I)

9. Study of the comparative cleaning capacity of a sample of soap in soft and hard water. (Unit - I)

10. Determination of the focal length of: (Unit - III)

11. Tracing the path of a ray of light passing through a rectangular glass slab for different angles of incidence. Measure the angle of incidence, angle of refraction, angle of emergence and interpret the result. (Unit - III)

12. Studying (a) binary fission in Amoeba, and (b) budding in yeast and Hydra with the help of prepared slides. (Unit - II)

13. Tracing the path of the rays of light through a glass prism. (Unit - III)

14. Finding the image distance for varying object distances in case of a convex lens and drawing corresponding ray diagrams to show the nature of the image formed. (Unit - III)

15. Identification of the different parts of an embryo of a dicot seed (Pea, gram or red kidney bean). (Unit - II)

The syllabus for class 10th CBSE Social Science has been released on the official site of CBSE for the session 2020-2021. Students are advised to check the weightage of each unit and prepare accordingly.

India and the Contemporary World - II

The syllabus for class 10th CBSE English Language and Literature has been released on the official site of CBSE for the session 2020-2021. Students are advised to check the weightage of each section along with their sub-units and prepare accordingly.

This section will have two unseen passages of a total length of 700-750. The arrangement within the reading section is as follows:

For writing tasks, there will be internal choice

4. Writing an analytical paragraph on the basis of the given map/ chart/ report/ line graph etc.in about 150-200 words. 10 marks

The Grammar syllabus will include the following topics in class X:

The above items may be tested through test types given below:

6. Dialogue writing/Reporting a dialogue on a given cue. 6 marks

Internal choice will be there.

7. One out of two extracts from prose/poetry/drama for reference to context. Two Short Answer Type Questions on interpretation. 2x2= 4 marks

9. One out of two Long Answer Type Questions from the book ‘FIRST FLIGHT’ to be answered in about 100-150 words each to assess creativity, imagination, and extrapolation beyond the text and across the texts. This can be a passage-based question taken from a situation/plot from the texts. 8 marks

10.One out of two Long Answer Type Question from the book ‘FOOTPRINTS WITHOUT FEET’ on theme or plot involving interpretation, extrapolation beyond the text and inference or character sketch to be answered in about 100-150 words. 8 marks

The syllabus for class 10th CBSE for HINDI Course-A has been released on the official site of CBSE for the session 2020-2021. Students are advised to check the weightage of each section and prepare accordingly. 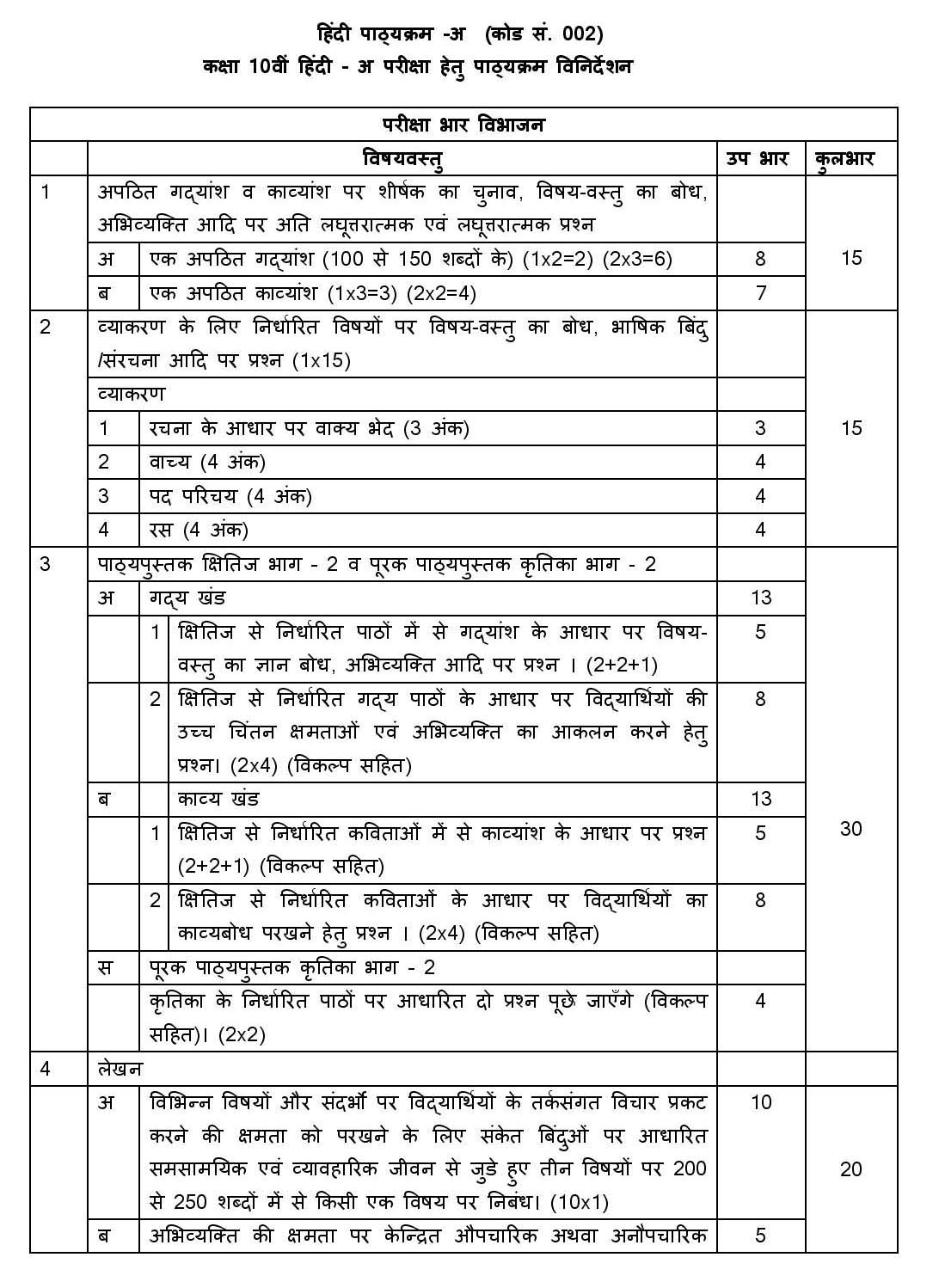 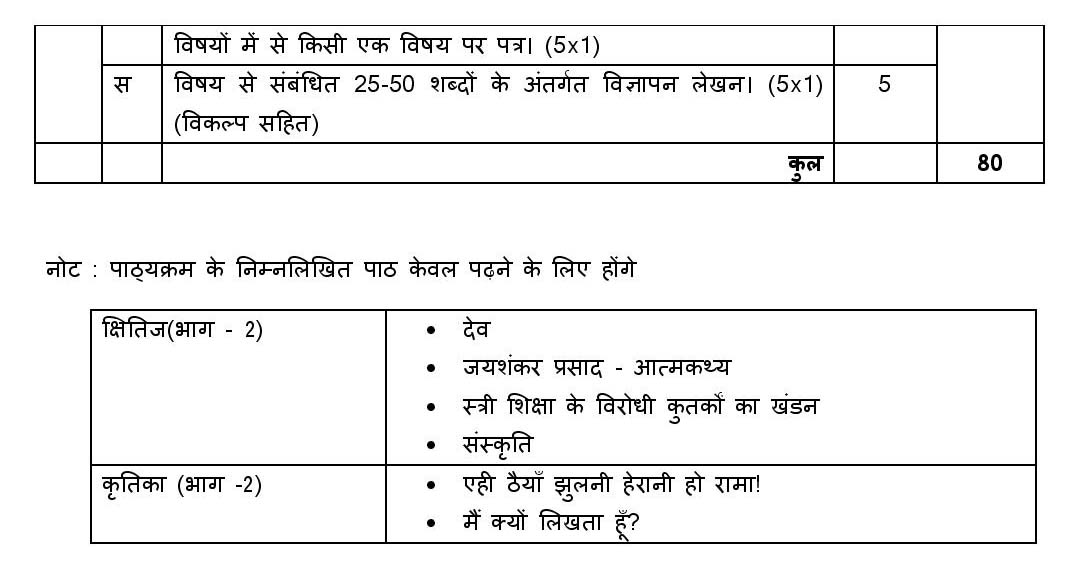 The syllabus for class 10th CBSE Hindi Course-B has been released on the official site of CBSE for the session 2020-2021. Students are advised to check the weightage of each section and prepare accordingly. 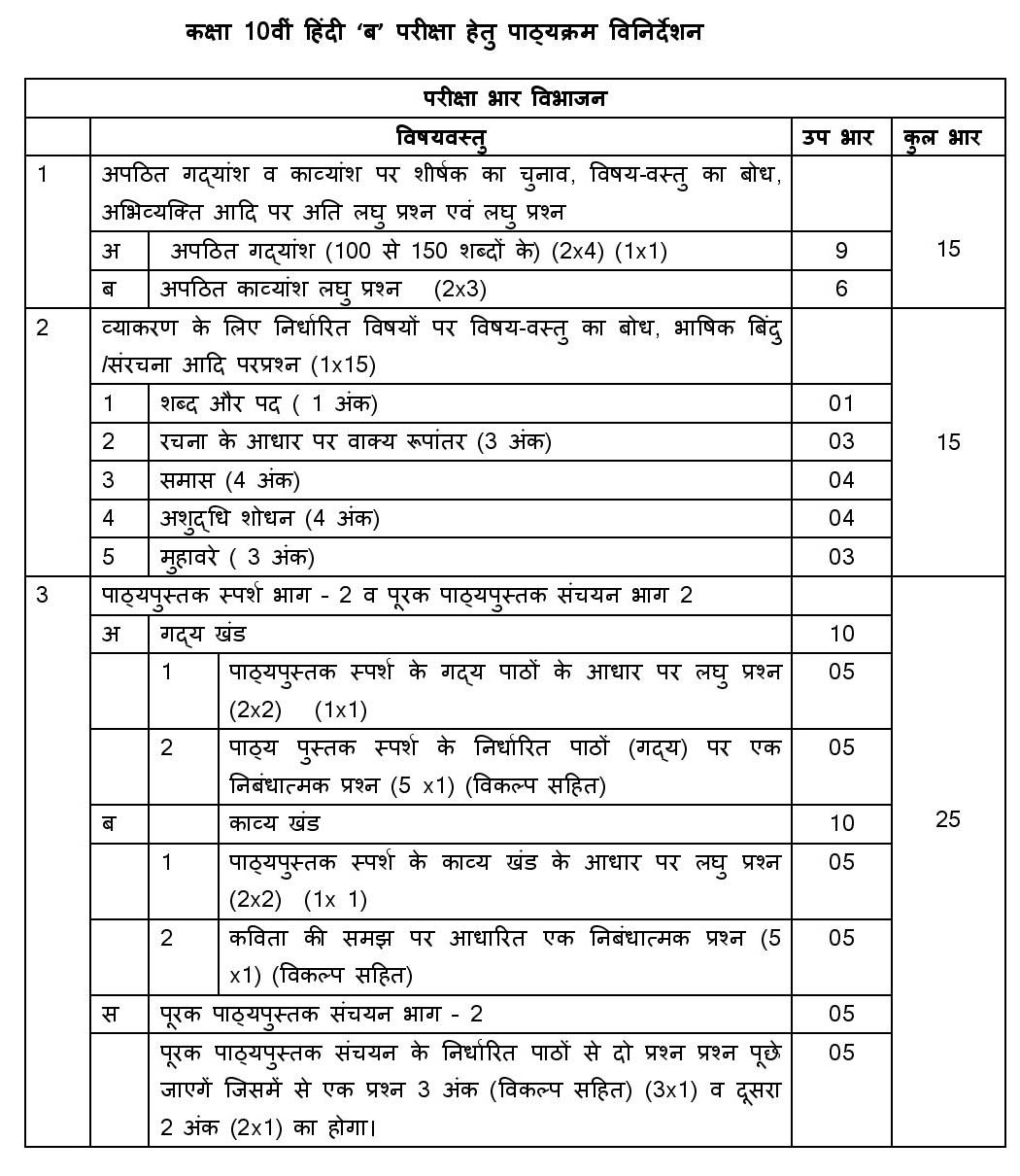 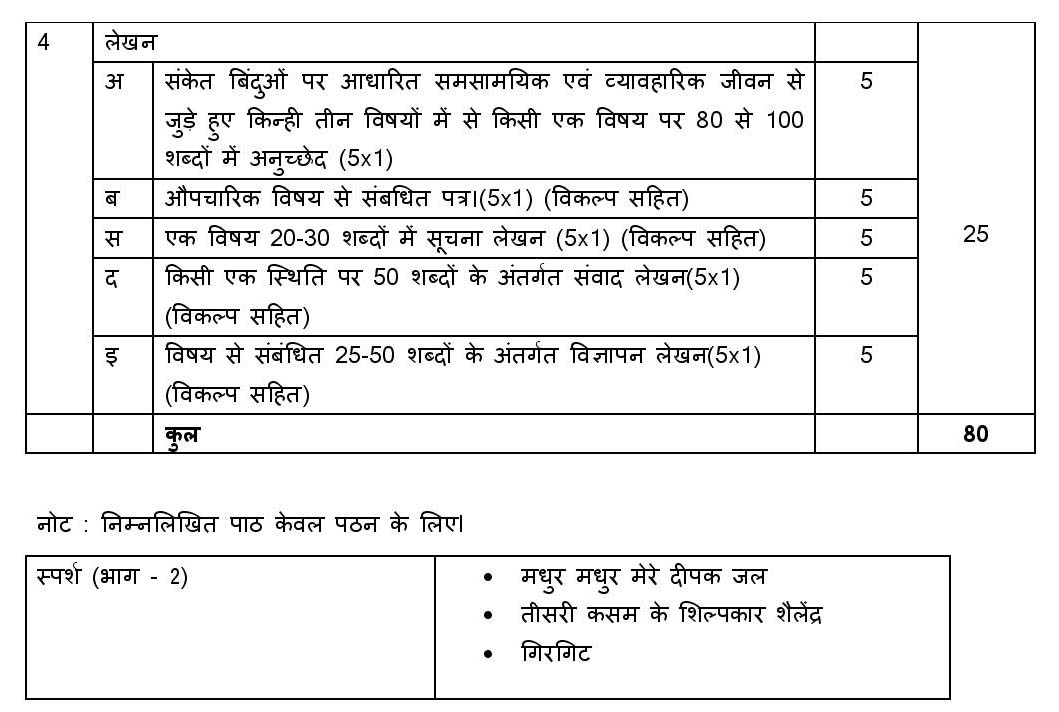 The syllabus for class 10th CBSE Computer Applications has been released on the official site of CBSE for the session 2020-2021. Students are advised to check the weightage of each section and prepare accordingly for theory along with practical. 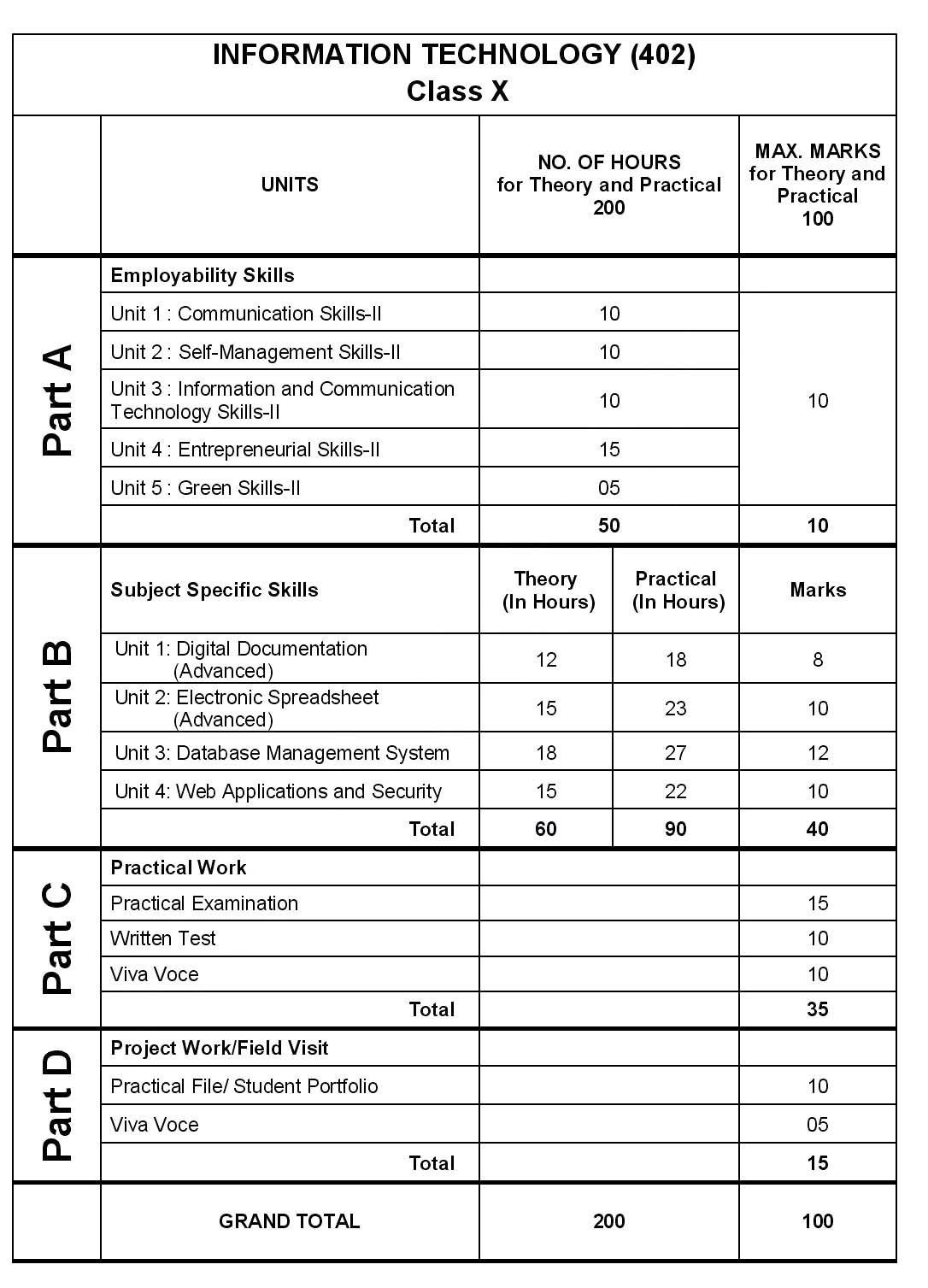 Here we have attached a checklist for students to keep a check on their progress. They can note down the date when they start a chapter and when they complete it. They can also note down their doubts in a particular section and there is an added feature in this checklist is the revision column. That will help students to know their revision status chapter-wise. 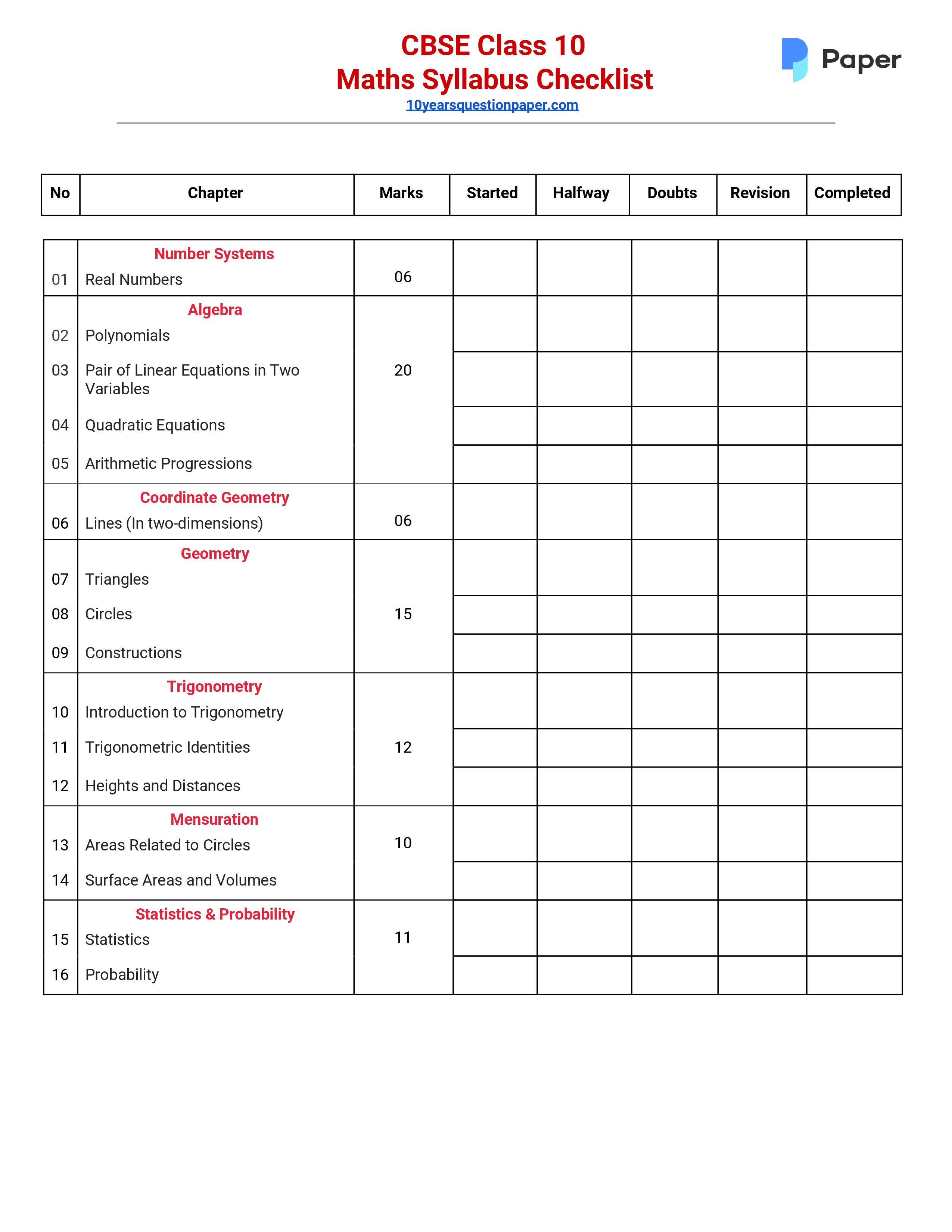 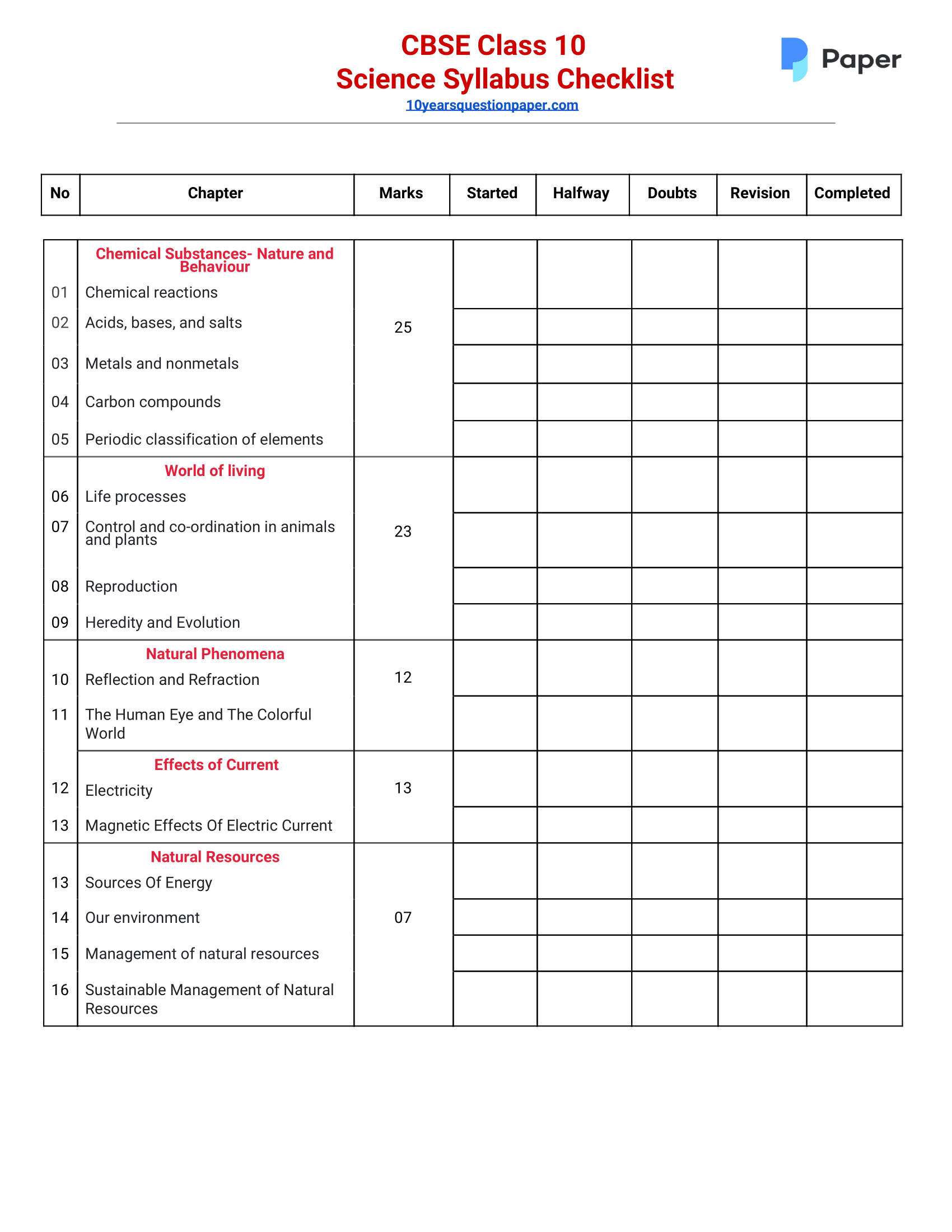 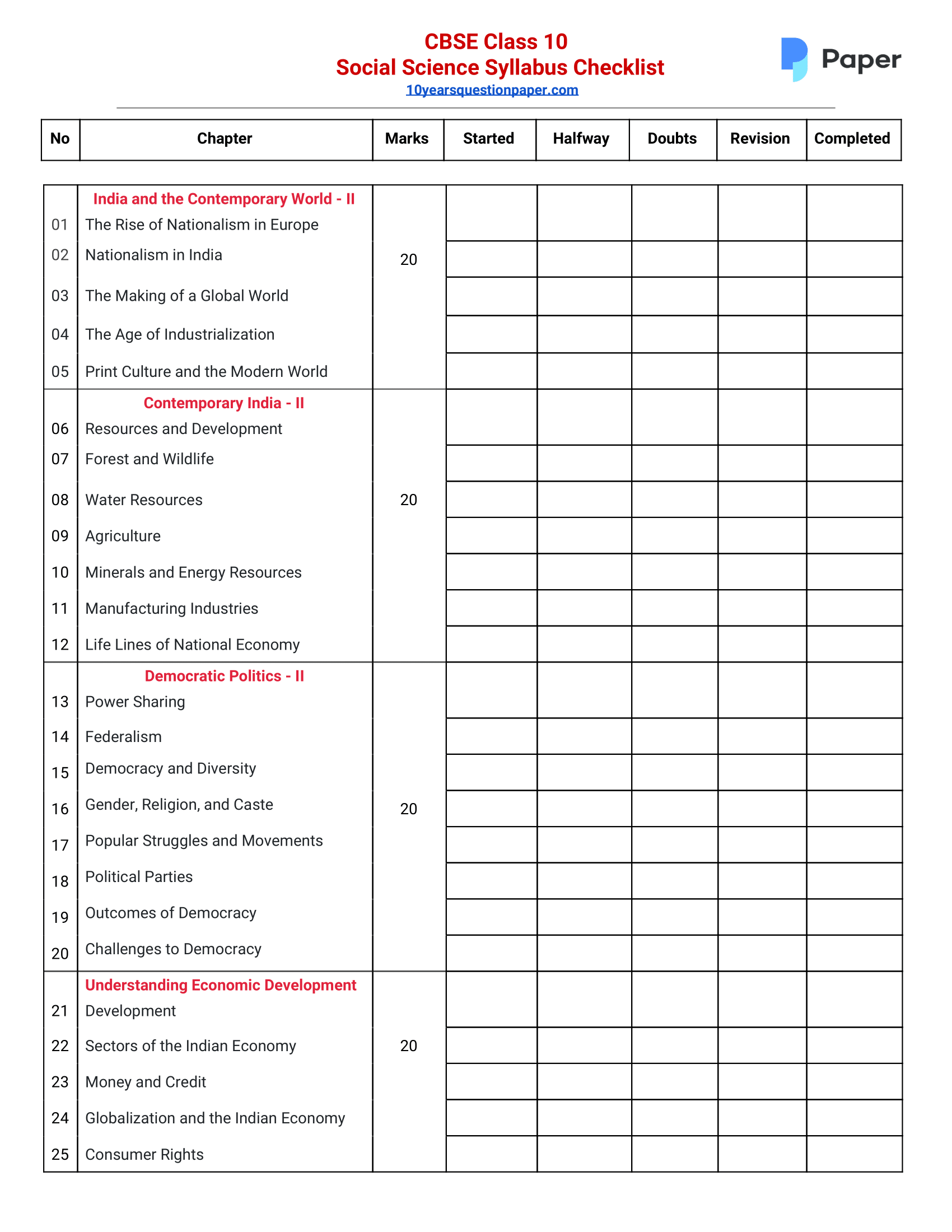 We hope right now students would be enjoying the quarantine period by playing indoor games and doing fun activities. But after seeing the class 10th syllabus they would definitely gear up to complete the portion before their board exams and keep ample time for revision and will practice the previous year question papers which are available on our site for free.

The Central Board of Secondary Education (C.B.S.E.), through a circular, has urged all its students to prepare for the Board Exam 2021 according to the syllabus suggested by the board and not as in NCERT books.

What is the syllabus of CBSE Class 10?

The Class 10 CBSE Syllabus is designed by the board officials of CBSE and NCERT, which consists syllabus for all the main subjects like English, Hindi, Maths, Science, and Social Science. The CBSE Class 10 Syllabus gives you detailed information to cover in the particular unit along with unit-wise weightage Marks.

Hey! So, have you start preparing according to the latest Curriculum CBSE Class 10?